Are smaller, decentralised Energy-from-Waste solutions the way forward for the UK? 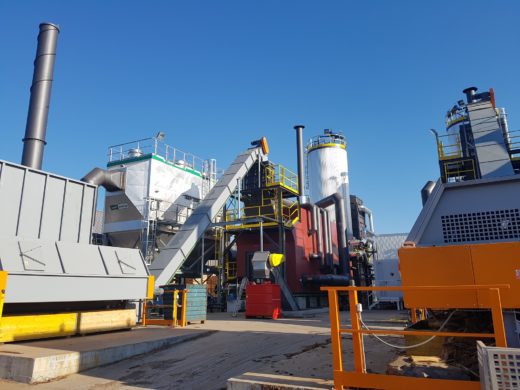 The topic of Energy-from-Waste (EfW) solutions isn’t a new one in the context of the global waste and recycling debate, and the reality is that when it comes to the implementation of energy recovery technologies, the picture differs greatly from one nation to the next.

And even more so when it comes to decentralised Energy-from-Waste systems.

Our MD, Simon Webb, recently shared his thoughts with ENDS waste and bioenergy on the role that more localised solutions can play in the evolution of embracing a more circular economy – along with the additional benefits they can bring to the UK’s waste, recycling, and recovery landscape.

If you missed the original article, catch up here…

A closer look at the EfW landscape

The way countries treat and process their waste has always been a topic of great interest and contention – what works for one nation, doesn’t necessarily suit another.

And, while European countries such as Germany, Austria, and Sweden have been utilising alternative fuels – including Refuse Derived Fuel (RDF) and Solid Recovered Fuel (SRF) – for many years, and have advanced national waste infrastructures to mirror this, the degree of uptake has a lot further to go in fellow European locations, such as Romania.

However, regardless of geographical location, there is one constant at the heart of the entire energy and power generation industry – innovation.

And as the spotlight firmly shines, from both a legislative and societal perspective, on harnessing the resource potential of more of the globe’s wastes, equipment that is able to process the increasingly ‘challenging’ fuels – which generate significant levels of slag and ash – is now occupying a higher place than ever before on the waste management agenda.

In recent months for instance, Wales was one nation announcing the shift away from larger-scale EfW plants in favour of their smaller counterparts – with the Welsh government revealing a moratorium on any new EfW plants that have a capacity of more than 10MWe.

This forms part of the country’s ‘Beyond Recycling – a strategy to make the circular economy a reality’ plan – which contains a number of policies to help the country achieve a zero-carbon economy by 2050.

Wales has, as a nation, been highly successful in terms of its recycling rates – seeing it named one of the global leaders in this sphere in recent years. And, as a result of the success of the country’s reduction in waste, it has now reached the point of not needing large-scale EfW infrastructure to treat its residual waste – a position other parts of the UK should look to applaud and emulate.

What about waste export?

The exportation of waste has long featured in the media headlines, with many recent investigations depicting the horrific aftermath of illicit waste transfers – huge piles of burning rubbish and extensive plastic pollution.

For wastes which are difficult or expensive to dispose of in the UK, some waste management firms immediately look overseas for a solution – hoping the reprocessors in other countries either won’t notice or care if the commodities sent are different from those listed.

This is neither an acceptable nor a sustainable practice.

Not only are more overseas countries following China’s 2017’s plastic waste import bans – and rightly so – but as a first-world country, we should in fact be leading the way in this respect. It’s our responsibility as a nation to compliantly process our own wastes, in order to reap the ethical, environmental, and financial benefits.

And everyone needs to remember that when the export path is chosen, we’re not shipping ‘waste’, but a valuable energy source for other populations to use – which really doesn’t make any sense.

It’s reported that 67% of the UK’s plastic packaging is exported as RDF, but we have the opportunity to stop exports and boost our own national recycling infrastructure.

Adopting this approach would see the UK paving the way and setting a shining example when it comes to best practice, not contravening the regulations, and looking for alternative processing routes.

Unlike larger, centralised solutions, localised plants allow for greater resource utilisation – in the form of thermal energy, as well as the more easily redistributed electrical power.

Firstly, larger plants rely on aggregating wastes – such as RDF and SRF – from smaller collectors, whereas if smaller EfW solutions are implemented on a local scale, the transportation of wastes, and in turn pollution levels, can be significantly minimised.

If these wastes are travelling a shorter distance to be processed – and less trucks are required to travel further afield – this helps to reduce transport-related carbon emissions.

In turn, this also leads to the creation of more localised jobs, which can also decrease the number of people commuting greater distances – again, positively impacting the country’s pollution levels.

It’s also no surprise that smaller-sized solutions require less space compared to their larger counterparts, meaning selecting a location is less restrictive – and it may even be faster to obtain planning permissions for this kind of plant.

But it isn’t simply the environmental and logistical impact which is more favourable with decentralised Energy-from-Waste systems – due to their reduced size and localised nature – they also don’t incur the same grid connection costs.

Aside from the greater emissions and costs, there’s another disadvantage to more centralised systems – the amount of heat by-product that’s simply ‘lost’ in the process. However, with small, decentralised plants (SWIPs), there’s the potential to capture and harness this resource to power communities in towns and cities – and this is the model which the UK should be looking to implement. We need to utilise our end-of-life materials sustainably, boost our national infrastructure, and implement a waste management strategy with the health of our planet’s future at its heart.

The future of EfW in the UK

Last year, a report – entitled ‘No time to waste: Resources, recovery and the road to net-zero’ – from UK think tank, Policy Connect, uncovered that EfW solutions are the key to solving the UK’s national waste crisis. It called for a more ‘Scandinavian approach’ to our waste management – claiming that widespread deployment of EfW plants is the ‘safest, cheapest and most environmentally responsible solution to the UK’s residual waste problem’.

So, when evaluating whether decentralised Energy-from-Waste solutions offer a glimmer of hope to drive forward a sustainable future, the answer is yes. And by shifting towards a less centralised process, this is how we create a more closed-loop solution, which sees us embracing our ‘wastes’ for what they really are, a valuable energy source.