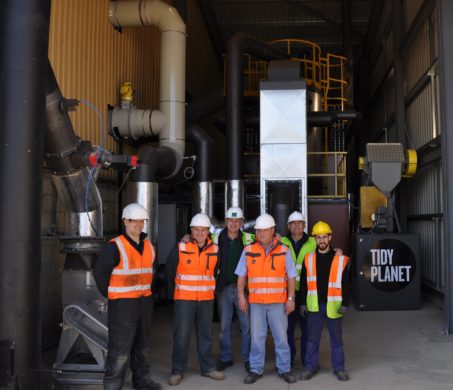 Boilers are not a new technology – they’ve been turning energy sources into heat for hundreds of years. But innovation means that they can increasingly harness the value of an ever-wider range of materials, on an industrial scale. Our sales manager, Huw Crampton, spoke with Energy Management, commenting on the development of systems that present a wealth of opportunity for the world’s resource agenda. If you missed the original write-up, catch up here…

When it comes to procuring fuels to produce heat, commercial drivers often influence the decision-making process.  The price of the fuel can drastically affect the margin of an operation after all, so cost is vastly important. But increasingly, environmental factors are coming into play, and not just for the eco-responsible firms who have previously sought to uphold their green conscience.

Fossil fuels are depleting – nobody would deny that. But there’s more to this argument. Price volatility means many businesses seek enhanced resource security, which can be achieved by integrating other energy sources into the mix. If those energy sources are ‘wastes’ that an organisation has produced itself, the security is greater still, as the creation of a closed-loop model is possible.

When it comes to this evolving energy mindset, some companies are extremely astute. They’re scouring the market to identify technologies that will support them in their plight. It could even be argued that they’re driving innovation. Others are less aware of the level of change within the boiler sector, and consequently the level of potential that now exists.

Defining exactly which furnace is best suited to each situation is not always easy, but factors such as the heat capacity requirements, heat transfer fluid, operational hours, automation levels, the desired degree of gas purification and – of course – the characteristics of the input energy source, will all affect the technology specified.

In the UK, for example, organic waste – particularly surplus foodstuffs – remains a huge problem. The increased ability to effectively salvage this material – in accordance with the waste hierarchy and once reduction, reuse and recycling attempts have been exhausted – therefore needs to be more widely understood. It is even possible to transform complex food waste into an energy source.

In 2016, for instance, the British Airways in-flight catering facility, managed and operated by DHL, became the world’s first airline caterers to begin dealing with CAT1 food and catering waste on-site (Heathrow). Previously 2,200 tonnes per year of the ‘high-risk’ food and packaging materials from non-EU flights had to be sent to licensed hazardous waste incinerators for specialist handling. However, a collaboration with Tidy Planet and DHL Envirosolutions changed this, and in 2017, a second project was implemented next to London’s Gatwick Airport as a result.

Here, heavily-contaminated CAT3 wastes from the airport’s concessions and concourses make their way for processing at a new resource & energy recovery centre. Tackling 10 tonnes of complex material per day, their on-site IED compliant biomass combustion systems can produce 25,500kW of heat in the same timeframe.

Technology of course makes this possible. Once pre-sorted organic waste is shredded to liberate the material and produce a homogenous 20mm particle size, it is then conveyed to a drying system, where it is exposed to high temperatures to create a powdered biomass fuel.

When it reaches the desired moisture content of less than 10%, it is cooled before a rotary screen sieves out any remaining plastic and foil. This extracted packaging material is used in a neighbouring EfW facility, and the residual ‘product’ is a high-quality energy source which powers the site’s specially-developed biomass boiler. This heats enough thermal oil to operate the drying system, plus an additional 15,000kW of energy for space and water heating for the airport’s wider buildings.

The design for this plant took almost five years to perfect, but this sustainable solution can now be mirrored on high-hazard commercial sites worldwide, from hotels and hospitals, to supermarkets and food manufacturing factories.

But the potential does not end there. As boilers – and complementary biomass technologies – become more sophisticated, they can handle an ever-growing range of organic wastes with different combustion characteristics and physical properties.

Also, heat is not the only potential output from this closed loop thinking. The aforementioned London plants have shown that certain biomass configurations can transmit heat via thermal oil – rather than steam or water – to generate electricity efficiently.

So, the world’s energy management challenge is far from solved. However with every week that passes, the sector presents more opportunities than have ever existed before, and boilers have a significant role to play in this innovative picture.