Unconventional fuels are the future of the waste industry

The concept of Waste-to-Energy (WtE) isn’t a new one – it’s been around for many years – but with an increasing focus on the environmental agenda from the Government and businesses, 2019 has been an important time for innovations in this arena.

Our MD, Simon Webb, recently spoke to The Energy-from-Waste Network about the role alternative fuels played in 2019 and their importance in shaping the future of the waste and recycling industry. If you missed the original article, catch up here…

There’s no doubting that 2019 has been the year of plastic waste – from David Attenborough’s pollution-related revelations on Blue Planet, to many big brands pledging to swap out plastic packaging for more sustainable alternatives – and it’s rapidly become viewed as the enemy of the waste sector. But should this really be the case?

Shouldn’t we be looking at, and celebrating, how we can utilise plastic waste, and other – often regarded as ‘troublesome’ – waste streams, to reap environmental benefits? Instead of polluting our oceans or being landfilled, the intrinsic energy value of plastic should be recognised and embraced – if we can’t avoid its production or recycle it, we should undoubtedly be converting it into energy, regardless of the volume in which it appears.

For example, if we look at the waste hierarchy model – implemented by the European Union in 2008 – we see that the prevention and recycling of waste is the preferred method, before recovery and landfilling options are to be considered.

So, while there have been many debates over the past twelve months about the positives and negatives surrounding converting waste into energy, one thing which is universally agreed is that we – guided by this European model – should be taking the best, most environmentally friendly option possible. Therefore, if energy recovery is the only feasible destination for the commodity in question – because it can’t be prevented or recycled – this method should be given the credit it is due.

There’s no hiding from the fact that the combustion of unconventional fuels is a more sustainable option than extracting fossil fuels from the sea or land – this is nothing new. So, while the Energy-from-Waste (EfW) route isn’t as advantageous as the production of some other renewables, EfW technology is evolving all the time in terms of its ‘greenness’. The old-fashioned perception of an incinerator processing municipal solid waste (MSW) is a world away from the reality of modern WtE plants.

In truth, the emissions produced from specially engineered energy recovery boilers are lower than many existing solid fuel or oil burning units, and as companies operating this kind of equipment are under more scrutiny from a legislation perspective, we can be assured of their performance.

Renewables are arguably the utopia for how we generate our energy, and given the United Kingdom’s geography, tidal and wind power are methods the country’s decisionmakers should definitely be looking to invest more in. However, this won’t happen overnight. Plus, adopting renewables alone won’t solve the problem of how we can more sustainably manage and utilise the wastes we continue to produce.

Supply and demand is also where alternative fuels excel too. The priority for sites needing to generate energy is usually the security in supply. Organisations need energy 24/7, and given renewable resources – wind, solar and tidal – cannot always be guaranteed, energy recovery from waste is something which is being increasingly considered, because we generate and throw away so much of it on a daily basis.

The harsh reality is that more energy is going into landfill than ever before, and this needs to stop if we’re ever going to achieve a more circular and less linear economy.

It’s not all negative press though, there has recently been a lot of noise in the media about the use of alternative fuel in the aviation and automotive markets – with Air France planning a flight to San Francisco using sustainable aviation fuel made from inedible waste fats and oils – and this is a trend which we will likely see elevate over the coming months.

Aside from the obvious advantage of preventing waste from being landfilled, there are other great benefits – both financial and environmental – to harnessing the resource potential of such wastes. Two primary pull-factors are reduced; off-site disposal costs and becoming self-sufficient with organisations’ management of their own troublesome waste streams – both of which have bottom-line and ethical benefits for businesses. 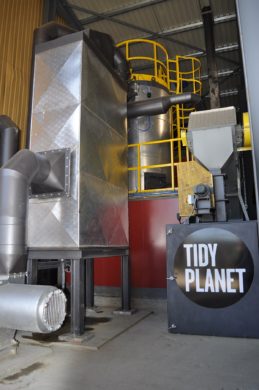 London’s Gatwick Airport is one site which has picked up the environmental baton and is powering full steam ahead with utilising unconventional fuels. In 2016, it invested in an on-site WtE plant to processes food-contaminated MSW and catering waste from aircraft and the airport – this sees 10 tonnes of waste collected, shredded, dried and screened daily, before entering the boiler to be combusted. This entire process takes 24 hours and produces approximately 25 MW of heat energy per day, which is used to power the plant process as well as provide heat for the airport’s recycling facility.

This is just one example of a business closing the loop, removing its off-site disposal fees and reducing its carbon footprint. Imagine the environmental results if more airports and much wider organisations across the country followed suit.

When it comes to 2020 and beyond though, there’s no doubting that alternative fuels will continue to be a major player in the industry. And this is largely down to technology – the equipment market is advancing at an accelerated rate, meaning there are more solutions which can process tricky wastes and extract their resource potential.

While RDF and SRF will continue to make the headlines next year, when thinking about other – more unusual – EfW feedstocks, it’s the more ‘problematic-to-dispose-of’ wastes which will likely make their way to the forefront of people’s minds. This includes many materials that were previously only destined for landfill or incineration, including tyres, poultry feathers and by-products, paper production waste, carpets and even fish farming residue.

Taking fish waste and mortalities as an example, they are able to be processed by legislation-compliant systems to create fishmeal and fish oil – used for the production of biofuel and biodiesel. In fact, it was only in the last 12 months that we heard of Hurtigruten outlining its aim to use fish and other organic wastes, to generate biogas, and power at least six of its cruise ships by 2021.

The increase in the UK’s energy recover capacity is also a key factor as to why this overarching trend will continue to soar. For instance, in November this year, it was reported by the Provisional Environment Agency that UK exports of refuse derived fuel (RDF) in the first three quarters of 2019 had fallen by 8.6%, when compared to the same period last year.

So, when it comes to why unconventional fuels are the future of the industry, it’s not only because they offer a more sustainable way to generate a useful energy resource from our otherwise landfilled – or exported – wastes, but they also encourage the nation to adopt a different attitude to waste and see it as something beneficial, as opposed to problematic.