KFC a worldwide well renown fast food outlet, trailblazers of the sector have already started to implement energy saving environmental initiatives at its flagship stores, so far a 32% reduction in energy usage has already been achieved at their LEED accredited sites, by using items such as LED lighting, solar panels, daylight harvesting systems and smart electronics that control fryer running times. Aiming to be the greenest fast food chain, new stores and refurbished sites benefit from sustainably sourced timber throughout, 30% more insulation and reflective roofs to stop heat absorption from the suns rays. With segregation in store allowing the collection of dry recyclables and food wastes being sent for composting, could the stores find a further improvement for the valuable commodity of their used cooking oils?

KFC Produce substantial quantities of used cooking oil from the deep fryers at their sites, Richard Darler head of construction for KFC was seeking a more sustainable method of dealing with these wastes, one that would complement their initiatives of greening the stores and in line with their programme for reducing energy consumption. The used cooking oils were currently being stored, collected, transported and used to create bio-diesel. Richard Darler and Tidy Planets Simon Webb met in 2010 and the suggestion of an on site system to recycle the oils, turning them into heat, hot water and electricity had the ear of Darler from the start. Reducing oil storage and collections would lead to a much cleaner waste compound, hot water and heat would reduce the outlets reliance on fossil fuels and bring not only cost savings but much wanted improvement to KFC’s own energy reduction targets.

The solution was presented to KFC and installed as a pilot at its flagship store in Wincanton, now on a roll out programme the aptly named CHiP, a Combined Heat and Intelligent Power system has been installed at the KFC Outlet in Trafford Park Manchester (pictured). The CHiP uses the cooking oils as a fuel after passing through a specially designed filtration system. The oils are pumped directly from the friars via a pneumatic suction system straight into the fuel storage tank on the CHiP, meaning less footfall outside of the building greater cleanliness in the back of house operations and no risks associated with oil storage outside. The CHiP provides to the outlet in one week from 250 litres of used oil, 1 megawatt of heat equivalent to 95% of the sites hot water and heating demand and 0.8 megawatts of electricity, equivalent to 15% of the sites electricity consumption.

With the CHiP being eligible for government incentives not only KFCs energy reduction targets have been improved but bottom line profitability. By changing from traditional oil collections the use of the system has lead to an effective trebling of the value of the used cooking oil being produced. The chain has further attributed a saving of 1800 tonnes of CO2 per year, per store by the reduction in the use of fossil fuels for heating and electric and up to 4000 tonnes of CO2 emissions from a reduction in transport emissions if the oils are used on sites in the future. 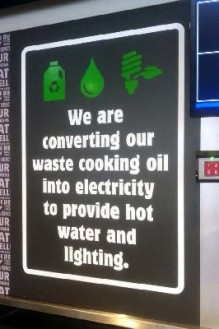